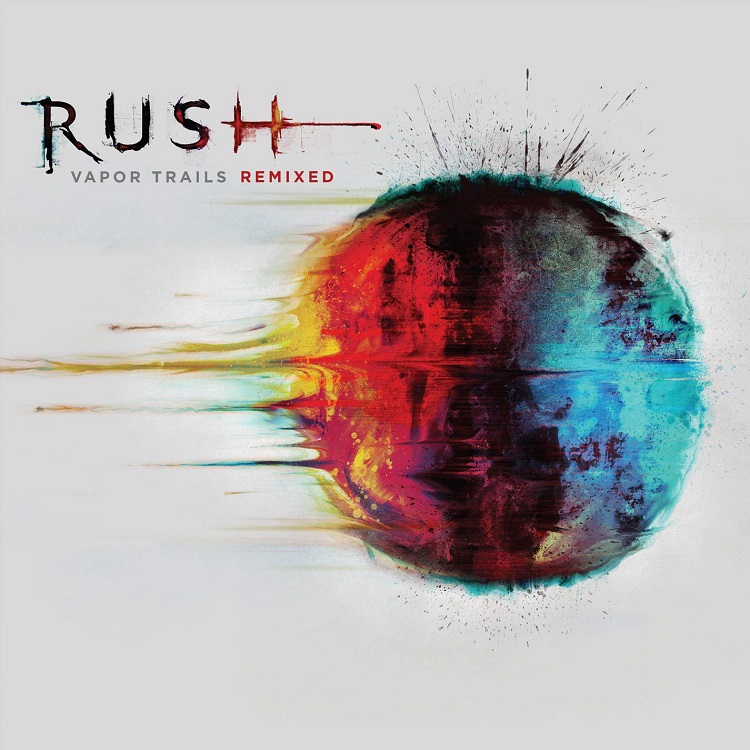 Rush triumphantly returned, after a five-year absence, in 2002 with Vapor Trails, a personal and emotional album that at times expressed drummer Neil Peart’s rise from the ashes after the death of his daughter and wife in 1997.

To the untrained ear and more pointedly to the Rush fan, there was little wrong with this album. Who’d a thunk it when Rush announced years ago a desire to remix Vapor Trails. In an interview with that magazine, singer/bassist Geddy Lee said, “The mixes were really loud and brash. The mastering job was harsh and distorted.”

On Tuesday the Vapor Trails remaster effort came to fruition.

Listening to Vapor Trails – Original it’s hard to tell just how muddy the contribution from all three band members is. The remix reveals the true nature of the vocals, bass, guitar work and percussion as each stand out on their own, then come together as one, to produce the final intention of the Vapor Trails album.

The whole album, but especially Lee’s vocal, sounds like the recording was performed through a trumpet mute. Vapor Trails (Remixed)

breaths and is one of the best examples of what remixing an album accomplishes.

Peart takes charge on track opener “One Little Victory” as if to say “I’m Back” but for much of the original album his work comes across as timid and more comfortable in the shadows, almost a re-thinking of whether he was ready to return to the limelight. The new mix shows Peart with fashionable in your face percussion with lots of poignant play finally emerging – the “Lost Sounds” if you will. It easy to recognize the remix’s contribution to Peart with how cutting the snare and cymbals emerge from the muck.

Guitarist Alex Lifeson probably fared the best on the original but the clean feel to the album really allows his guitar work to bust through. His solo on “Earthshine” was always simplistically elegant but all the production grime from the original is wiped away.

If you are intimately familiar with Vapor Trails – Original listen to it again in its entirety and then listen to Vapor Trails – Remixed. A number of elements to the songs emerge and it’s then that the listener understands just how under-produced or over-produced (depending on how you look at it) the original was: Check out these Easter eggs:

“Out of the Cradle,” the album’s last track, is almost completely made-over and its new life makes this track a hidden gem.

Vapor Trails – Original was never a bad album and stood out well on its own as another fine effort by Rush. In fact, below is my review of the album in May 2002 for the Orange County Register:

Long dismissed as irrelevant in mainstream music, Rush continues to plunge ahead. After a five-year absence to allow drummer and lyricist Neil Peart to recover from the deaths of his wife and daughter, the power trio releases yet another gem. But heed this warning: Vapor Trails does not continue in the same vein as the fresh “One Little Victory,” released last month as the first single. The band not only has created a new sound, but has managed to blend a little bit of ‘70s, ‘80s and ‘90s Rush into the 13-song effort. The melodic jam-tempos of “Secret Tough” and “Peaceable Kingdom,” the dreamy, almost whimsical “Ghost Rider” and the reflective approach to “Sweet Miracle” explore adventurous territory proving the band has a new directive. Indeed, Rush devotees may scratch their heads, but by the third listen the fire will be brighter than ever. Grade: A-.

Rush completely under represented this album on the Vapor Trails tour in 2002 playing just four songs off an album with 13 tracks and most were worthy of the live show. After a side-by-side comparison Vapor Trails-Remixed far surpasses the original and offers such a new experience Rush fans can expect the Vapor Trails – Remixed tour.