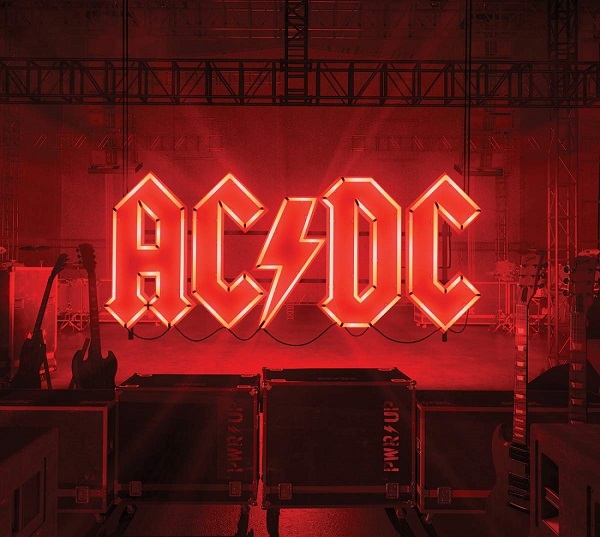 Someone I knew long ago described AC/DC as simple 4/4 time rock, but a fun listen.

He was one of these wannabe guitar player types who sat around with axe in hand but couldn’t play two bars of a song if his life depended on it, and he never got better.

This guy was wrong on pretty much everything else as I’d come to learn after we parted ways after a few short years, but not AC/DC.  I never heard AC/DC as a band with complex musical arrangements, time signature changes or anything else but a loud, gritty hard rock band that kept it inside the garage and didn’t require many spins to decide a thumbs up or thumbs down.

AC/DC continues this act with their latest release Power Up, an album that, by all accounts, came as a surprise and perhaps a near miracle. Since AC/DC’s last record, 2014’s Rock or Bust the band has endured:

But today, the gang’s all back!

The 12 song, 41 minute Power Up sounds just like what you would expect from AC/DC. The band never deviates from the tried and true and that remains the case here for AC/DC’s 16th studio album. In fact, Malcolm Young gets writing credits on this one since Angus Young scoped out the vault of unreleased AC/DC songs for Power Up. As such, the band offers this album as a dedication to Malcolm in much the same way as Back in Black was for original singer Bon Scott in 1980.

AC/DC has endured a lot in just a few short years and with most members in their mid-60s and Johnson at 73, the band continues to push the rock and roll age barrier and defy expectations. Power Up delivers the AC/DC goods as Angus Young holds down the fort on guitar, Rudd smashes drums and cymbals throughout and Johnson sounds as gravelly as ever.

Power Up opens with the working classic “Realize,” a solid winner filled with multiple guitar chords that compete but compliment at the same time.  “Rejection” comes down hard and burly before handing more melodic features over to “Shot in the Dark,” which announced the band’s return a few months ago, on a platform reminiscent of “Rock and Roll Ain’t Noise Pollution.”

“Through the Mists of Time” gets as close to an AC/DC ballad as you’ll get.  Even the name sounds reflective and with a softer melody and a more delicate guitar, the band works through this one quite well without getting all mushy. But standard AC/DC returns for the catchy “Kick You When Your Down” then “Witch’s Spell,” one of the best songs on the album, closes out the first half thank to a grooving, almost the Who like, guitar harmony.

“Demon’s Fire” opens the second half sounding more like Megadeth than AC/DC before the low growl gives way to standard Johnson vocals but Dave Mustaine would approve of the snappy head-banging guitar chorus.

What you want from AC/DC. Songs constructed from a backbone of guitar then filled out with even more persistent guitar sometimes enveloped with crushing cymbals and snares. “Wild Reputation” won’t make a “Best of” list but could slip right into any other album, “No Man’s Land” moves along slowly and methodically without slogging too much to the end while “Systems Down” and “Money Shot” bring a familiar cadence allowing Young to rip off some solos.

Finally, “Code Red” closes out Power Up with some catchy phrasing and euphonious guitar that keeps the second half of the album from being cut entirely from the same cloth.

Let’s face it, you won’t get complex harmonies, elaborate fretboard handling or masterly drum fills but if AC/DC suits your pallet, spin any one of their albums to successfully pass the time on a long car ride or as cool atmosphere for a summer BBQ.

Power Up probably comes to many as a small symbol of relief during quite arguably the most strangest, a somewhat fearful and certainly an unimaginable year anyone has experienced. Loud abrasive guitars, heavy yet breezy power chords and the enduring classic sound in a band nearly 50 years old not only says “We’re back” but offers a bit of normalcy for those in a desperate search for some.