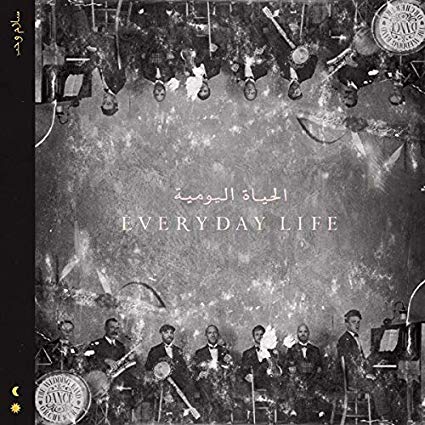 because for some reason, I thought the band planned to call it quits after A Head Full of Dreams.

Whatever I heard, I didn’t buy it, and figured they would just take an extended break. But my how time flies as it has been four years, though just two since (what felt like) a combined tour with 2014’s Ghost Stories wrapped.

Coldplay released some tracks off their eighth studio album (out Nov. 22) and upon first listen it sounded like more of the same from the last two I failed to appreciate. But then a few more songs were made public and high hopes began to emerge.

Everyday Life takes as big of a departure from their last two albums, as the last two albums did from the band’s first five. Do not expect the Coldplay that brought you such stellar songs like “Paradise,” “Viva La Vida,” “Speed of Sound,” “Clocks” and “Yellow” to return triumphantly. Everyday Life will leave you questioning the band’s motivation and longing for a bit more. Perhaps, a whole lot more once fully immersed in the new album and glimpses of light shine through as Coldplay takes you to another place you may or may not want to go.

To their credit Coldplay retains their original core of the band when  singer Chris Martin who contributes on piano and acoustic guitar, lead guitarist Jonny Buckland, bassist Guy Berryman and drummer Will Champion started in 1997. They don’t rest on their laurels and bring a level of musicianship and craft that arguably excels beyond many of today’s bands. Unfortunately, they also hit it out of the park their first 15 years and fans want more of the same!

The double-album Everyday Life carries 16 songs and comes in just more than 50 minutes. Elements of their gushy melodic past freckle about, some songs sound more like filler and others clearly have a purpose for which you likely won’t understand, at least not for the time being. Considering the album’s length, let’s tackle song by song rather than inundate with long paragraphs that might confound you as much as Everyday Life might.

First Half of Everyday Life:

Second Half of Everyday Life:

Coldplay sounds like a band either looking for meaning, trying out new things while riding their massive popularity wave or purposely changing direction from their past. They don’t shy away from engaging in social issues and don’t hesitate to use their microphone to make a statement (already they have plans to make the forthcoming tour environmentally friendly) but this album feels like it leans heavily in that proclamation direction while sacrificing some profound symphonic arrangements.

While admirable, and they can certainly do as they wish, most fans probably enjoy their music and melodies as a whole rather than taking a deep dive into the lyrics in order to change their life based on any messaging found and interpreted through their personal lens. At any rate,  Everyday Life rises a bit from the last two albums thanks to a handful of dominate songs but much of this double album sounds like B-sides and demos left on the cutting room floor.