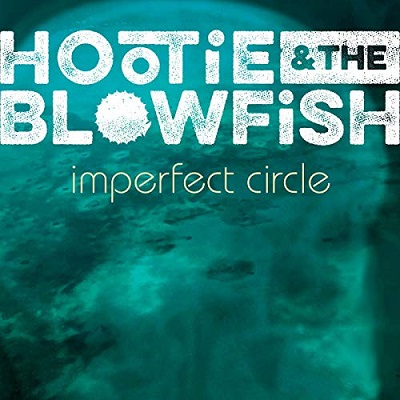 Hootie & the Blowfish is back.

, their first album in 14 years. I don’t even care if this album is good or bad. I’m just glad singer Darius Rucker and the rest have returned to pop rock and given those of us who jumped onboard the Hootie train so many years ago a chance to relive a bit of our 90s youth and hopefully ride that joy for a long while longer.

I first learned of Hootie when I saw them open for Toad the Wet Sprocket in 1994 just before they exploded on the music scene. You knew then something special was coming. And something special arrived shortly after. Their 1994 debut album Cracked Rear View

was a “best of” record it had so many singles. Afterwards, I caught them multiple times, now as headliners in large amphitheaters. I even met a few of them and learned how cordial and down to earth these guys  –  singer Rucker, guitarist Mark Bryan, Dean Felber on bass and drummer Jim Sonefeld – compose themselves.

Just don’t call Rucker, Hootie. You will get a very stern “My name is Darius” in return. No it wasn’t me.

Enough of your personal history. How is the new album?

Well, it’s pretty hard to capture lightning in a bottle twice so after all this time, don’t expect a new “debut” album. Rucker, if you didn’t know, went on to a rather successful country music career after Hootie disbanded and quite a bit of that influence comes across in the new album. The 13 song Imperfect Circle has a different tone than past Blowfish albums, perhaps evident in some of that twang interspersed throughout the record, but clearly even musicians mature and develop as individuals and in their chosen instrumentation, therefore, I think all of that is captured here.

Apparently, adult pop music or adult contemporary pop music is a thing so file Imperfect Circle under this label. Please don’t expect the boyish charm of Cracked Rearview and temper any similar anticipation that came with the solid but underwhelming 1996 follow-up Fairweather Johnson

but Imperfect Circle perhaps says it best. This album will probably appeal to a wide swath of fans including country, their core and those who fell in love with them long ago – but it won’t fully satisfy everyone.

Imperfect Circle opens with “New Year’s Day” a fun pop song with a touch of country. Even the name “Miss California,” which comes next, sounds like a traditional Hootie song.  “Wildfire Love” featuring British singer Lucie Silvas initially sounds like one of those country duets, but listen again. Some of the guitar elements sound like country music but this is a pretty solid ballad and Rucker’s baritone mixes really well with Silvas’ vocals.

Now wait just a second, if you’re in the camp of where is Hootie & the Blowfish.  “Hold On” gives classic Hootie sounds and though the chorus seems like Rucker implemented his new found country roots, the song serves as a reminder this is a Hootie & the Blowfish record not Darius Rucker. “Turn It Up” has a catchy vibe with some background trumpets and halfway through it sounds like Hootie channeling the 70s. I see now, where adult contemporary pop comes into play.

“Not Tonight” is a great song, one of the best on the album, and while the two-minute “We Are One” offers a fun, catchy rhythm it’s a typical mid-album track.

The band clearly dives into some country fare on “Everybody But You” which captures the classic Hootie beat thanks to Felber’s bass line but the chorus brings straight country and “Lonely on a Saturday Night” already has the name going for it so why not make it a country music song? They do and if country is not your thing don’t skip, it’s a great song.

“Why” could have been on Cracked Rearview. I’ll leave it at that. I’m wondering with “Rollin’” if Hootie has created some type of new country, pop, rock genre. Rucker brings his country attitude, Bryan offers a solid rock guitar and the rest of it sounds so much Hootie. You know, the more I listen to this album the more it’s really starting to settle in.

“Half a Day Ahead.” If Hootie and the Blowfish were a brand new band and released this song as their first single, I think they’d probably ignite the airwaves. You know what, it’s too short. Lastly, “Change” closes out Hootie and the Blowfish’s sixth studio album and offers a somber look at life. It’s totally un-Hootie, has nothing to do with country and Rucker stands front and center with those incomparable vocals. Change indeed.

In many respects, Hootie & the Blowfish bowed out and returned the best way possible. The saturation of Hootie after Cracked Rearview was immense and try as they might, the band just couldn’t keep up the hype. They disbanded, Rucker found a new calling, Sonefeld found a better calling and everything turned out all right. Rather smartly, they celebrated the 25th anniversary of Cracked Rearview (failed to come anywhere near Portland) and now they have a fresh new album without all the pressure of their past.