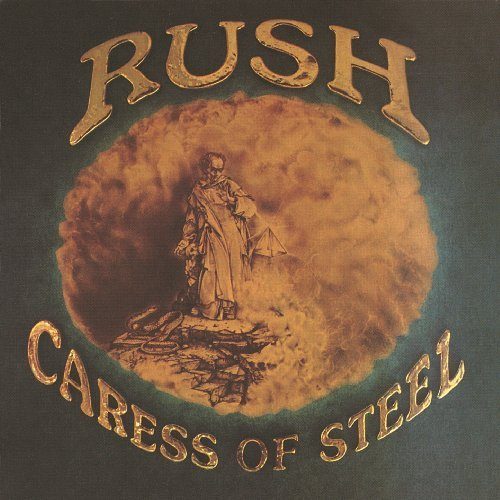 After all these years…

reissued on vinyl. You know that expensive reissue on 200 gram virgin vinyl. Though long ago purchased on CD, cassette and vinyl the new record was meant to fill out the collection of Rush reissues. Like others, I never really cared for this album though it certainly offered moments. My plan eventually was to sit down and fully listen, with the record gatefold open, following along with the lyrics despite past attempts. My thought was perhaps Caress of Steel would come across similar to 2112 when I first sat down and listened to the seminal album in its entirety reading the lyrics.

featuring the lyrics – everything my listening predecessors received way back when I was a mere tyke. It was an import, from the Netherlands, and I sprawled on the carpet in my college dorm then got quickly carried away into the story of “2112.” Needless to say, I was floored. How did I not find this so many years earlier?

Thus my hope for Caress of Steel.

Before I lose you, this 40 years after the fact album review of Caress of Steel took a foothold a year or so ago then quickly came to fruition last week. My plan to write an April Fool’s Day review of the Top 10 Best Rush Songs featuring the worst Rush songs was swiftly curbed when I realized I couldn’t find 10 Rush songs to more or less make fun of. (Yes, a few exist.) I figured Caress of Steel would provide a third of this list helping me reach the 10 song plateau, but I was wrong.

I also realized what did not work, at least for me, with Caress of Steel. However, the album is unfairly demonized and as a whole offers a solid piece of music that opened a future pathway for Rush. Listen…

Guitarist Alex Lifeson saves this album and his work on Caress of Steel is undervalued, underappreciated and takes center stage on the record.

Caress of Steel opens with three “regular” rock songs starting with “Bastille Day” which no doubt certainly felt promising for the rest of the album in 1975 as a hard rock song with driving guitars. “I Think I’m Going Bald” while a fun take on getting older also shows a bit of the band’s mindset especially lyricist and drummer Neil Peart. Imagine already reminiscing about the past and facing the unknown of growing older while in your early 20s. Just a decade or so later the masterpiece, “Time Stand Still,” perhaps borne from this song would become a Rush staple. Finally, “Lakeside Park” which the band played on the R40 tour dials it back a bit with a breezy melody and a relaxing aura.

Then the Deep Throat voice opens the 12 minute-plus “The Necromancer” and returns twice more to continue narrating through the three parts that make up this “short story.” So you get the debut album followed by Fly By Night

then the first three songs of Caress… and what the heck? I quickly remembered the Deep Throat and why I often shut the album off early. For sure this song deserved a spot on my faux Top 10 list. Then Lifeson starts playing. Yes, it’s a bit hard to get through the weird narration but give it a chance and let the guitars flow.

Lifeson delivers so many chords and rhythms that probably were lost on those who failed to give the album and this song a chance. Caress of Steel demonstrates Lifeson as a remarkable player (already) and if Rush had called it quits after this album no doubt many would wonder what if…

“The Fountain of Lamneth” continues Rush’s foray into the concept album genre this time taking up all of Side 2 (20 minutes!) instead of half a side like “The Necromancer.” “Fountain…” gets divided into six parts and foreshadows as the obvious predecessor to “2112.” It’s clear what Rush is trying to do but it falls short of the grand designs of “2112” because the story just isn’t there, at least not as dramatic and climatic nor as clear as the tale of “2112.”

Each part works, in some cases quite well musically, however taken as a whole “The Fountain of Lamneth” meanders at times but the transitions from one part to the next pose the larger issues. Name the only studio recorded drum solo by Neil Peart? “Didacts and Narpets.” A fun minute-long break between song opener “In the Valley” and “No One at the Bridge” but sounds more like band rehearsals than a contributory part of the saga.

Meanwhile, some sections (“No One at the Bridge”) sound like a score for a David Lynch flick like Twin Peaks while other sections (“In the Valley” and “Panacea”) already sound dated for 1975 and could have a copyright date of 1968. But “Bacchus Plateau” rules Side 2 and completely stands on its own. Regardless, “The Fountain of Lamneth” contains some flaws but always boasts a stretch or two in every part of solid Rush work most often thanks to Lifeson. Other than “Bacchus Plateau,” what some sections lack in melody and classic instrumentation Rush delivered on their first two albums (and subsequent) Lifeson usually more than makes up for when soloing or even providing rhythm guitar.

Akin to the original issue, the gatefold features photos taken at Massey Hall in 1975 with the lyrics displayed prominently across both sides, prominently however doesn’t mean readable. The medieval-style font makes following along a bit hard to read which perhaps presented another problem for those trying to absorb the album in the confines of their basement.

Bottom line, Caress of Steel requires listening. I believe Peart said in later years the album works well via headphones because of the many nuances that come through. The band certainly could have routinely played any of the concept parts live as an extension to another more popular song or to end the main set or encore.

At any rate, Caress of Steel does not pass the time well while commuting or painting the house.