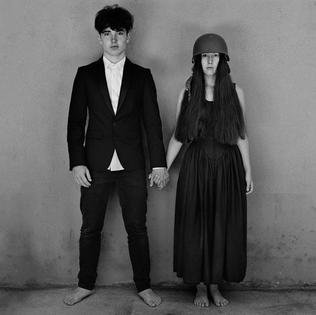 U2 feels a bit tired. Sounds it too.

It’s hard to believe three years passed since U2 flooded the inboxes of everyone owning an iTunes account with their Songs of Innocence album. But, the Irish band returns sans the free automatic  upload with Songs of Experience a 13-track album possessing just a little of the freshness of its predecessor but mostly a meandering yawner.

No, not much to brag about for Songs Of Experience

U2’s 14th studio album released today (Dec. 1). As the follow-up to the great Songs of Innocence it mostly ebbs but flows a little with a few potential gems that remind you of U2’s ability and potential that not unlike an aging athlete who shows flashes of brilliance while stumbling through injury and a battle with Father Time.

That’s not saying U2 – singer Bono, guitarist The Edge, bassist Adam Clayton and Larry Mullen, Jr. on drums all now in their late 50s – is up against their career clock. Plenty of bands ride well into their 60s and some even experience songs of resurgence. But after 14 albums and 40 years of playing music Songs of Experience reflects more a lack of fire rather than an unforgettable fire.

Supposedly, the band wrapped this album some time ago until the results of the Brexit and United States presidential elections went against the band’s personal ideology. And, most recently, Bono revealed a serious health scare that also derailed pending album plans, claiming “I shouldn’t be here cause I should be dead” an apparent true-to-life lyric that opens “The Lights of Home.”

So they decided to go a different route for the album, seemingly scrapping whatever was ready a year ago. Bono’s penchant for attention is hardly a secret so perhaps the grousing first aired by The Edge about President Donald Trump was more about ginning some newsworthy interest, appealing to the band’s core base and giving them more time to actually complete the album considering its release was widely expected shortly after Songs Of Innocence

an album rife with its own production delays.

First off, never open an album with a background song for contemplating life. Unfortunately, that’s what “Love Is All We Have Left” accomplishes along with weird Cher-inspired auto tune diction halfway through.  “Lights of Home” gets a good acoustic start with solid bass delivery and eventually might rise to a decent U2 song but the hand-holding choir refrain that closes out the final minute prompts the “next track” button. Thankfully, “You’re The Best Thing About Me” offers what we’ve all come to expect from U2. Great beat, a memorable chorus and the familiar guitar sound that makes U2, U2. The album should have opened with this song as it picks up right were Songs of Innocence left off.

All told, not much here is blatantly anti-Donald Trump though certainly “Get Out of Your Own Way” could suffice for U2’s advice to the Man in the White House who can’t seem to do just that. The song ends with a spoken “wordsmith” of sorts yelling a rewrite of “The Beatitudes” as originally taught by Jesus Christ in His Sermon on the Mount. These “new beatitudes” continue into the start of “American Soul” a song easily cleaved off of Switchfoot’s Where The Light Shines Through – perhaps situated  after “Looking For America”? If Bono is indeed pointing a finger with his re-write of the Biblical classic he might want to recognize the three pointing right back at him. At any rate, both songs help elevate this album delivering some solid rock chords and a more aggressive guitar compared to the rest of the record. Both represent the better selections on the album.

A solid 60s vibe rounds out “Summer of Love” or at least an attempt at resurrecting the aura of the summer of love, but ultimately it falls a bit short. It’s not a bad song but doesn’t wholly fit U2. “Red Flag Day” takes a bit to grow on you – it’s a routine sounding track taking some cues from “Sunday Bloody Sunday,” yet penetrates a bit with a really addictive guitar and bass arrangement. But what the heck is going on with “The Showman (Little More Better)”? Don’t even bother.

“The Little Things That Give You Away” (previewed during the Joshua Tree 2017 tour) and “Landlady” work best as slightly heard background music at a party so thankfully the band follows those with the album’s other gem “The Blackout.” Likely an eventual classic U2 song, “The Blackout” offers a catchy cadence and solid Clayton bass line through out. Should be fun live.

“The Blackout” is the lone bright spot in the last half of the album as Songs of Experience concludes with “Love is Bigger Than Anything In Its Way” perchance a long lost theme song for an 80s teenage coming-of-age movie and “13 (There is a Light)” which is a rewrite, redo or rehash of “Song for Someone” off the last album. Honestly, I don’t get it.

It’s almost as if the band ran out of energy recording the album and just gave up. The four pre-released singles pretty much constitute what’s worth listing to on this record.

If Songs of Innocence were the band’s first album, Songs of Experience would easily qualify as the sophomore slump. It boasts few bright spots and hardly contains the energy, ingenuity and stamina that Innocence brought.

Admittedly, I am not a lyric guy. Rarely do I pay actual attention to any band’s lyrics in what they have to say. I’ve always felt the lyrics and the singing style was all part of the composition and make-up of the song like the guitar, bass and drums. Sure, I’ve probably missed out on certain enlightenment, if you will. So, in light of the band’s political outspokenness among other vocal critiques it’s entirely possible this album misses the mark musically but nails it in social and political commentary if that’s your thing.

Regardless, nothing here is groundbreaking nor does Songs of Experience rise to the level of Innocence but at least it’s better than Zooropa

The Deluxe Edition version includes an alternative mix of “Ordinary Love,” “Book Of Your Heart” ( a pretty good song!) and different versions of “Lights of Home” and “You’re The Best Thing About Me.”

U2 – Songs of Experience tracklist: