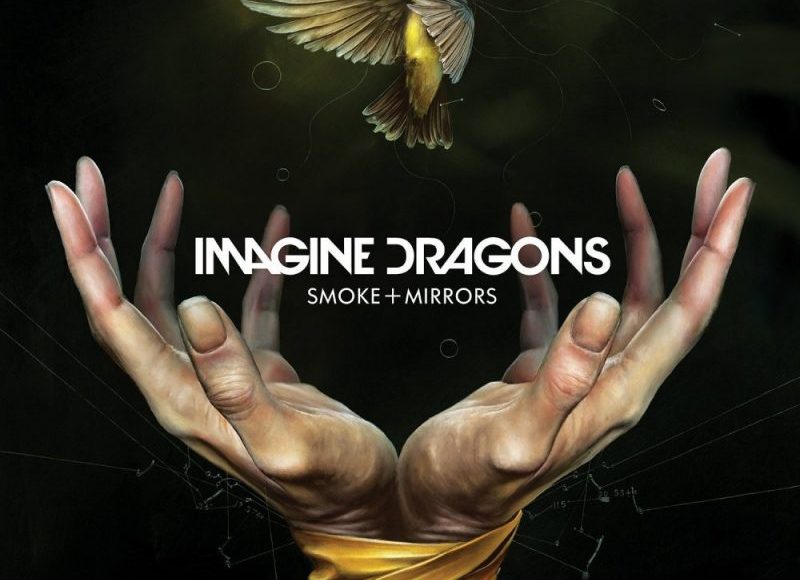 the quartet hailing from Las Vegas finally stopped releasing individual singles that seemed to serve only as fuel to keep afire the momentum to their ostensibly endless, and sold out arena tour the last few years and dropped their second full-length album.

today and unlike what tends to happens to bands after a highly successful first album only to see a sophomore effort fall flat, Smoke + Mirrors holds up quite well to its predecessor.

The band gave fans a taste of what’s to come with their leak of the singles “I Bet My Life” and “Gold” both of which are on this album and sure to be accompanied by several more hits radio should eventually play ad nausea.

Singer Dan Reynolds’ voice is a highlight of this album as his baritone tinged vocals shine throughout and that signature use of drums so prevalent on Night Visions is back but not the star.  It is clear Imagine Dragons tried producing an album to keep their distinct sound without duplicating everything that went well from their first release. They don’t fall into the trap of mimicking their other hits, of which there were many from Night Visions which sold more than 2 million copies, but you can still hear some of the past in the current offering.

Smoke + Mirrors opens with, of all things, a heavily keyboard laden song with “Shots.” It’s really a catchy tune, has a great repetitive guitar chord as a foundation and almost feels like a bold opening statement by the band that says we’re trying something different. Next is “Gold” released as a single last year which really hasn’t received much airplay but definitely could have been a leftover from the prior album. Daniel Sermon plays this awesome guitar chord that somehow doubles as a background loop and rocks as a solo. Expect this song to be played live and given justice on stage like they did with “Radioactive.”

The title track starts off sounding a bit familiar with hints of “Demons” but quickly turns a different direction and stands out on its own. It’s a hard song with some angst thrown in and holds up well.  The theme continues with “I’m So Sorry” which blends progressive rock into a modern rock tune.

“I Bet My Life” is making its rounds on radio and has some staying power. Straight up juicy pop but its order on the album tones back the fierceness of the prior two songs and brings back the band’s fun catchy roots. “Polaroid,” the fifth tract, is sure to stick in your head like an image on photo paper.

Of the several musical feats Imagine Dragons does well it’s their ability to bring hard intensity to one song and then tone it back for dreamy easy listening, like the succession of the industrial rock sounding “Friction” to the mellow “It Comes Back to You.” It’s not like they are angry adolescents desperately looking for attention but they can rise to the occasion and sound good doing it. Once getting their point across the band pops back into a catchy leisurely stroll or brings the melancholy done quite well on the early Coldplay-sounding “Dream.”

“Trouble” taps a bit into the folk rock sound so prevalent in today’s mainstream music and “Summer” is really the only tract that falls flat though like several songs from the last album a few more turns of the disc and don’t be surprised if sticks around.

The final two tracks offer solid bookends to what’s really a pretty strong album. “Hopeless Opus” feels like a smorgasbord of genres with a tribal sounding opening with a flute even, catchy rhythms border lining on listenable rap, grungy guitar melded together with modern rock.  “The Fall” is the albums longest song at six minutes and falls back on the band’s strengths of mixing memorable lyric cadences with pounding bass drums, and back and forth crescendos.

Nearly all of the songs on Smoke + Mirrors should reproduce nicely for the live show which is the band’s forte. The album blends well as a second effort, it keeps the band’s “sound” while reaching for new ideas, incorporating new hooks and melodies without sacrificing what turned them into an international touring machine.

Some of the songs make an immediate statement, others take a bit to ingest and yet, some if played live, will probably bring a different perspective that gives a reason to revisit the studio version. Hmmm, sounds a lot like Night Visions without sounding like Night Visions.